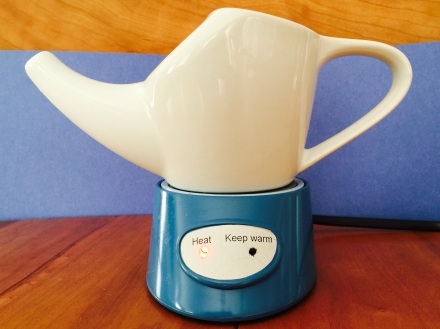 I hope this post finds everyone healthy and happy.

Have you ever used a neti pot? Neti pots were used as an ayurvedic yoga tradition in ancient India for nasal irrigation, In the past few year neti pots gained popularity in the United States after they were featured on the Oprah Winfrey show by Dr. Oz as a natural and health alternative for allergy and nasal infection sufferers.

I was a firm believer in the benefits of using a neti pot and like millions of neti pot users, I used warm tap water.  it was easy to get a perfect water temperature using tap water and the neti pot was very effective at helping me breath freely by cleaning pollens and pollutants from my nasal passages. An added benefit was It helped me sleep better at night by reducing congestion and also snoring.  But then in 2011, the evening news reported that two people had died from using tap water contaminated by the “brain-eating” amoeba known as Naegleria fowleri.  http://www.cbsnews.com/news/tap-water-in-neti-pots-behind-two-brain-eating-amoeba-deaths-in-2011-investigation-finds/

If this scared you like it did me, then it also ultimately resulted in not using a neti pot at all.  At first, I would either boil tap water or heat distilled water using my kitchen stove.  It was just too inconvenience to boil tap water or heat distilled water in the kitchen, transport it to the bathroom, let it cool down (sometime too long so the water became uncomfortably cool), and finally mixing it with neti pot salt. This was enough of an inconvenience that I stopped using my neti pot. Although not optimal, I once again began to using over-the-counter medicines which made my thinking foggy.  There had to be a better solution.

I came up with this prototype that warms distilled water to a perfect temperature right in the bathroom. I love it!  No more boiling tap water or heating distilled water in the kitchen.  I’m back to breathing easier and sleeping better thanks to a simple innovation.

As far as I know, this is the only neti pot designed to be used with a heating element.  The neti pot is ceramic and the water is heated to close to body temperature in 4 to 5 minutes.  It then keeps the water perfectly warm.

I’m asking for suggestion on what to name the device, suggested improvements, and colors.

I will be starting a Kick Starter campaign soon, and accepting pre-orders once I establish a sales price.  I would truly love to send you one of the first production models and hear your comments.

If you know anyone who suffers from allergies, nasal infections, snoring, or who like me stopped using a neti pot because of the inconvenience, then please let them know.

As I always say, take action every day and be grateful!

With Love and Respect,